Craft Beer and the Changing Face of DUI 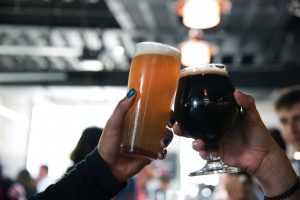 In 2014, craft beer sales grew to $19.6 billion, an increase of 22% from the year before. While craft beer is changing the beer world and the palates of drinkers everywhere, it also threatens to change the face of drunk driving.

In fact, craft beer and microbrews typically have an increased ABV (alcohol by volume). Since at least the 1800s, Americans have preferred lighter lagers and lighter beers with lower volumes of alcohol. Many craft beers, however, deliver a larger dose of alcohol – and drinkers may not be aware of the risks, making microbrew DUI accidents more likely.

The Link Between Craft Beer and DUI

The popularity of craft beer may mean beer drinkers are drinking high ABV beers more often, since craft beer ABV levels tend to be higher. An ABV of 5.9% is average for craft beer. Between 2011 and 2014, the number of new beers with 6.5 percent alcohol by volume or higher jumped by 319% in North America – in part because of the popularity of craft beers. The number of beers with 8% ABV or higher also jumped in this time period, possibly meaning a greater risk of high BAC DUI accidents.

However, the increased ABV of craft beer is not the only culprit to this growing problem. Microbreweries and craft beer makers often host beer festivals and other beer events to promote their products. Drinking at these events and then deciding to drive home can easily lead to a crash.

Unfortunately, some people may not think they are at risk of drunk driving with craft beer. Because these beers are made with fewer preservatives, drinkers may not always feel the effects of alcohol in the same way. In other cases, drinkers may associate drunk driving with traditional beers and may think they are at less risk with craft beers. Some drinkers also mistakenly believe craft beers are safer, more natural and even have lower amounts of alcohol.

Just because you like to drink craft beer doesn’t necessarily mean you’re at a higher risk of DUI. While it’s true that craft beer ABV levels are higher than most traditional beers, many factors can contribute to blood alcohol levels and DUI crashes.

In many cases, driver attitudes and choices – rather than just drinks — play a major role in DUI risk. Drivers who choose to drink craft beers can take alternate forms of transportation home. When drivers are serious about not drinking and driving and decide to consume less alcohol, they are less likely to cause a drunk driving accident.

Planning ahead is also important if you want to avoid drunk driving accidents. If you plan on drinking craft beers, designate a driver, take a cab home or find other ways to avoid drunk driving. No matter what kind of alcohol you consume, refusing to drive is the best way to keep yourself and other motorists safe.

Are You at Risk?

To see how easy it is to step over the blood alcohol limit with craft beer, it can be helpful to use a tool such as this online blood alcohol content calculator. It can help you estimate how many drinks you can consume before you’re over the limit. If you like to drink high ABV beer, you can use this to get a general estimate of your limits.

However, don’t rely on the online calculator alone. Several factors can contribute to how much you can drink before you’re over the blood alcohol limit. Your weight and size, as well as what you have eaten recently, can contribute significantly to how much a craft beer affects you. Tolerance for alcohol is also largely individual and can be affected by past drinking experience. A bigger man who drinks regularly and has recently eaten a large meal is less likely to be affected by a craft beer than a smaller person drinking on an empty stomach, for example.

At MPL Law Firm, we want you to stay safe no matter what your preferred beverage is. If the unexpected happens and you need legal support, feel free to contact our law firm at any time. If you’re ever unsure about whether you are safe to drive, the attorneys at MPL Law Firm urge you not to drive and to find a safe way home.